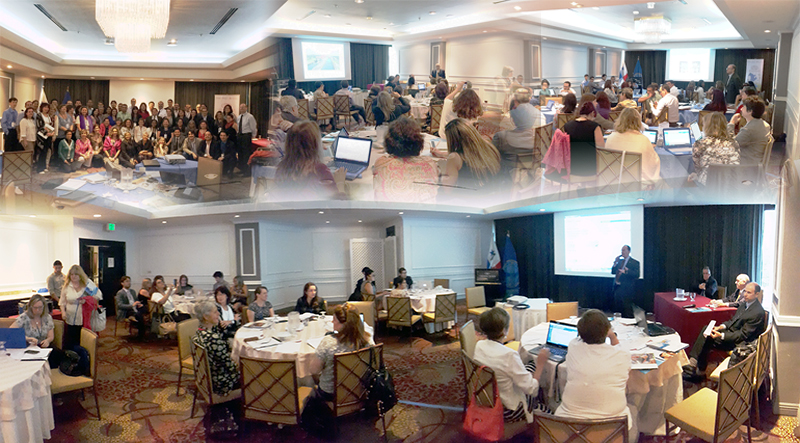 During the 17 and 18 November 2015 an expert workshop whose purpose was focused on discussing the "Challenges and Opportunities VCPH under the Strategy for the Universal Health Access and Universal Health Coverage" we were held.

At the meeting the process of development and consolidation of the Virtual Campus of Public Health, its place in the framework of technical cooperation of the organization and the challenges it must face today such as the growth of users and the development of new revised educational methods such as mass self-instruction courses.

An important aspect of the workshop was attended by representatives of institutions in the region with experience in online training health professionals with whom it was agreed to advance work associates.

The workshop deepening the work associated with PAHO areas such as BIREME Paltex, eHealth is also analyzed.

The meeting was attended by consultants of the organization, course coordinators, experts concerning reference institutions in the region, which pledged to network together to CVSP in developing projects for future work.

Opening the workshop they were attended by Dr. Federico Hernández Pimentel, PAHO / WHO representative in Panama and Dr. Themistocles Diaz, Deputy Chief of Health, Ministry of Health of Panama.

The workshop, attended by over 65 people, was attended by representatives of all Spanish-speaking countries in the region, plus Brazil.

They attended the meeting, both countries with nodes that are actively working on campus, as countries that are taking the first steps in working with the CVSP, allowing exchange experiences and create collaborative networks.

During the workshop the technical team presented the new developments made by the CVSP between 2014 and 2015 and the country representatives presented their experiences, they exchanged about the organization and governance models and discussed the process of nationalization of courses.

An important exercise performed was given to characterize the place of nodes country, which is their role and how they should be oriented to ensure relevant work stewardship under the development of human resources for health and support for the resolution of Access and Universal Health Coverage.

Among the topics covered in the workshops it should also be noted, analysis of OER (Open Educational Resources) where from presentations and exchanges made a space for dialogue opened for renovation work on the subject.

It was agreed among participants continue to share work virtually, via campus classrooms and social networks.

From the presentations in workshops and exchanges made a rapporteur to allow highlight agreements, proposals and recommendations for the work which will be developed later shared.