Actions to improve the VCPH 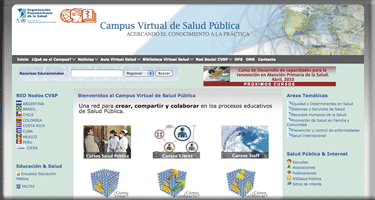 In order to improve and bring new ideas to work in the Virtual Campus of Public Health (VCPH), took place between March 24 and  28, several meetings and exchanges with Human Resources teams, KMR and   other areas consultants of the headquarters of PAHO / WHO in Washington DC that have launched or planned educational processes in the CVSP.

One activity was the workshop tutors and coordinators of the Diploma of Health and Local Development in the framework of Faces, Voices and Places, which is about to begin its second version, and which discussed the experiences on the selection of participants in the first course, in order to improve retention and academic success and make a major upgrade of the tools of reflection and interaction available on the VCPH all this in order to achieve more active learning.

In another of the meetings held is determined to make a first test with the course tutor training for online teachers have access to summaries of each participant that were previously sent by the representations of countries.

It was also proposed by Dr. Luis Cuervo, to continue the project to incorporate the CITI training program in research ethics as part of the proceedings in the VCPH.

As a result of exchanges and conducted workshops for the coordination of the VCPH, with different technical units of PAHO / WHO reached the following agreements: